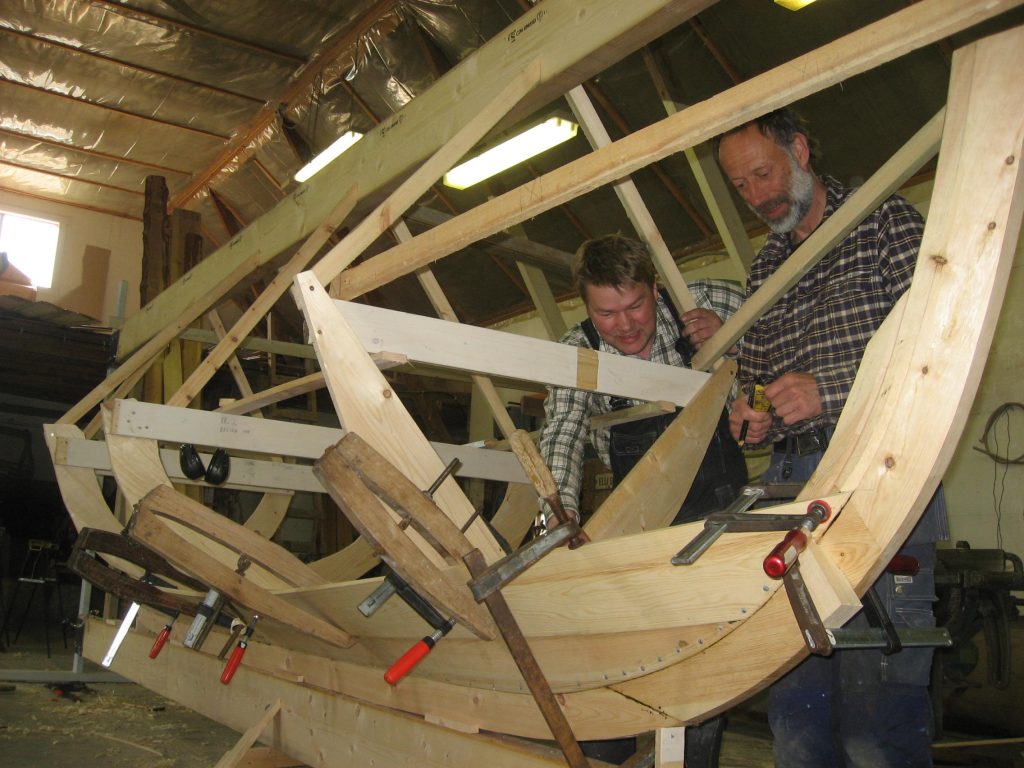 Icelanders have built clinker boats ever since the country was settled and these vessels have been produced everywhere in the country and have taken different forms depending on local circumstances and their intended use.

Building clinker boats is based on a traditional method in which the lower edge of a plank overlaps the upper edge of the next plank below it. Originally, the planks were sewn together, but later, wooden pegs and then iron or copper nails were used. This important cultural heritage and handicraft tradition enabled Icelanders to fish and hunt, and the boats were also used in agriculture and as means of transport. This traditional craftmanship has preserved the knowledge on which Icelandic coastal culture and its heritage are based.  Today, clinker boats are associated mainly with outdoor recreation.

Originally, the planks were sewn together, but later wooden pegs, and then iron and copper nails were used. In the early 20th century, boats were increasingly equipped with engines. Their form and size then changed, and they were referred to by the common name “trilla” (handliner fishing boat).

Building this type of planked vessels flourished until about 1980, but then plastic and steel took over as the preferred materials, and both the knowledge required to build these vessels and the number of new boats produced rapidly declined.

Traditionally, the knowhow involved in building clinker boats was passed down from one boatwright to the next, and in the 20th century, it was taught in most technical colleges in Iceland.  However, since the turn of the century, only one Icelander has completed a course of study in wooden boatbuilding, and currently no educational institution has this subject in its curriculum. In the past, this type of boat was an essential tool for fishing, hunting, agriculture and transport. Knowledge of the craftmanship required was thus the basis for coastal culture and its heritage. Clinker-boats are still built in the same way as they were in the past, but they are now used mainly for outdoor recreation.

Today, clinker-boats are constructed by specialist boat-builders, and the Herring Era Museum in Siglufjörður offers courses on the building and maintenance of planked vessels. Clinker-boats are on display in Icelandic maritime museums, where visitors can also learn about these traditional craft. At Reykhólar in West Iceland, the annual Breiðafjörður Boat Festival preserves and demonstrates traditional sailing techniques.

In addition to individuals with knowledge of clinker-boat building, several associations and museums also provide information on these watercrafts and the way they are built. One example is the Herring Era Museum in Siglufjörður:

The Herring Era Museum in Siglufjörður helps preserve the knowhow and craftmanship involved in building clinker-boats and other wooden vessels by providing information and courses on them. Each year, the museum offers courses that pass this knowledge on to new generations. Participants learn how to build new clinker-boats or repair older vessels. The museum has also cooperated with institutions in other countries on boatbuilding and preserving traditional craftmanship, including the North Norwegian Ship Preservation Centre in Gratangen, Norway, and the Maritime Museum in Gdansk and Katy Rybackie in Poland.

For the “Friends of the Breiðafjörður Boat Museum”, see: www.batasmidi.is.

This society’s main purpose is to “find, register, and preserve objects and artefacts of value for the history of boats, boat building, and navigation in the fjord Breiðafjörður. The museum aims to encourage new clinker-boat construction, preserve the skills involved, promote knowledge of sailing, and maintain awareness of traditional seaways in Breiðafjörður. In cooperation with the IÐAN Education Centre, the society has sponsored well-attended courses on building clinker boats held 2-4 times per year.